Digital 2013 kicked off to a promising start with Chris Thomson, Account Director at comScore, who shared some interesting data insights into rising numbers of text and display advertising. The staggering increase of mobile device usage and its impact on online advertising left us with lots to think about when facing the challenge of optimising ads for our clients.

Mark Treacy, the second keynote speaker and International Director at LinkedIn, shared his thoughts on how LinkedIn has undergone a transformation towards an online publishing platform, pointing out the differences between LinkedIn, facebook and twitter in regards to their audience and quality of content. He provided some interesting stats on members and engagement, and how businesses can utilise content on LinkedIn to target and gain a bigger following.

Third up just before tea break was Matt McAlister, Director of Digital Strategy at the Guardian Media Group, whose talk focussed on n0tice, the Guardian’s open mobile publishing platform. Starting as a hack day project, n0tice quickly gained momentum and turned into something bigger – and somewhat different – than they had ever expected. It was fascinating being guided through the process of this transformation.

Edward Rumley, COO at Chilingo, picked up after the coffee break, explaining why indie mobile game developers would be well advised to team up with a publisher if they are hoping to break into the crowded and competitive market. According to Rumley, over 400 apps push into Apples’ App Store each day, and far too many developers don’t spend enough time and effort on marketing their game effectively – or simply lack the knowledge and struggle with monetisation. A publisher who understands the developer’s needs regarding gameplay, monetisation, PR and marketing can be the ideal bridge between them and the audience. However, as important as a publisher may be, Rumley’s talk had the unfortunate ring of a pitch to it, and many live-tweeters picked up on the impression that he was merely using his 20 minutes to rather bleakly market chilling’s services and their apps. 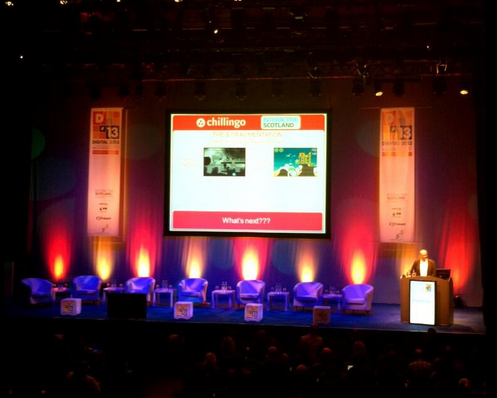 John Oswald, Business Design Lead at Fjord opened with “No-one knows what digital is, but we do know when it’s done badly” and continued by enlightening the audience about the good, the bad and the ugly in the world of digital design, and how to get valuable services to the market. He made some strong points clearing up several of the major design misconceptions and pitfalls for new businesses and CEOs who overload their apps and websites with too many features trying to provide too many services instead of focussing on one area successfully. Given the nature of his keynote, Oswald’s presentation was very visual and his claims were supported by various solid design examples. The king of quotes didn’t grow tired of providing us with odd sayings and phrases in order to make his message stick, some of the more memorable ones include “Sticking feathers up your ass doesn’t make you a chicken” and “Innovation doesn’t just mean creativity”.

Last but not least was Tom Hall, sixth and final keynote speaker and Vice President of Education Technology Partnerships at Pearson. Hall shared his thoughts on the future of education regarding the crucial role that digital technology will be playing. Opening with impressive statistics that as many as 65% of today’s grade school kids will end up in jobs that haven’t been invented yet, he went on to rethink the involvement of technology in education.  Hall highlighted the opportunities technology will create and painted a picture of a future where traditional education will be transformed into cloud-based multi-platform learning environments that are globally accessible, adaptable and playful. His predictions may merely present one of various possible outcomes; however, it can’t be denied that technology will shape the nature of education, not only as part of the syllabus but moreover as a means of “how”, “when” and “where”.

The morning concluded with a fireside panel debate, and with Julie Moulsdale as the moderator the first woman appeared on stage. This didn’t go unnoticed by most of the attendees, and so, unsurprisingly, there was a lot of noise on twitter throughout the panel concentrating on the role of women in technology instead of the six keynote speakers answering questions from the local audience as well as people who had been joining the conference online from home. 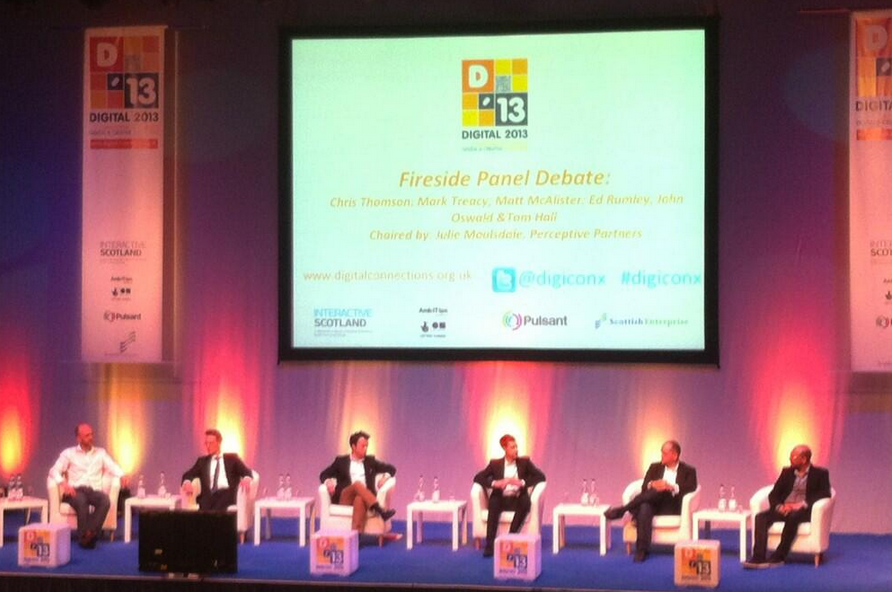 During the breaks it was a welcome diversion, however, to chat with other attendees and exhibitors. It was great to see the Scottish games industry represented by ten exhibitors, including indie developers and universities, who provided for good entertainment and insights into their professions.

The first one for me was “Building an Effective Digital Brand” which was held by Jim Wolff from Leithal Thinking, a branch of the longstanding Leith Agency. Wolff guided the attendees of his well-visited workshop through six steps on the road to successfully building their own brand. He concluded each building block by presenting us with questions to consider for ourselves and providing a couple minutes of silence to reflect on them. Let me briefly outline his six main points for you:
#1: Know Thyself – Know who you are and what you have to offer. Who are you? Who are you not? His most memorable example to underline the importance of these seemingly easy questions is undoubtedly the clear message from Dollar Shave Club:

#2: Know your market – Be aware of who you are trying to target and who your competitors are. Do you want to increase category usage? Or do you want to steal share? Whereas Coca Cola is trying to get people to drink Coke, Pepsi aims to get some of these people to drink Pepsi, not Coke. How does your service/product differ from those of others? What does your customer actually want?

#3: Know your core values – and make sure they become part of your brand. What are your values? What do you stand for? What are you against?

#4: Have an effective functionality and an engaging personality – this is pretty self-explanatory, but for a good example of both check out MailChimp and their charming mascot Freddie. Questions to ask yourself are: What works well? What works badly? What is your personality?

#5: Simplify! – this is taking the same line as John Oswald’s keynote on design, as it aims to cut out overly complicated and complex features to avoid overloaded and bloated websites and services. What can you cut out? What can you simplify? What does your audience really need to know? Wolff used the British government’s websites as brilliant examples of having successfully simplified complex matters and implemented a clear and simple design, stripped off any unnecessary fancy features.

#6: Evolve consistently – Where are you now? Where do you want to be? Don’t just stop where you are, but take little incremental steps towards your goal.

Conclusion: Jim Wolff gave a brilliant and informative workshop on an often neglected area, spiked w
ith funny anecdotes and examples, all the while following a clear and concise line.

My second workshop of the afternoon was “Building Agility and Responsiveness using Digital Tools” held by David Craik from his very own Bright Signals. The bar was high, and he didn’t fail to deliver. Craik calls for “less big bang campaigns, and more small scale experiments” when it comes to marketing. He presented several valuable tools to implement agile marketing and to help overcome marketing strategies which are still based on the highest paid persons in the organisation (HiPPOs). Amongst them were the free project management app Trello, and techniques such as the minimum viable brief, the “silent brainstorm” and A/B testing. The minimum viable brief should consist of “Get > To > Buy”, i.e.
Get men who want to lose weight
To try our low calorie bar
By telling them skinny is sexy.

Silent brainstorming aims to deal with common problems when brainstorming, namely the creative block and the tendency that HiPPOs will be the most dominant. Craik also highlighted the importance of A/B testing in order to gain insights into your customers. His final message was “Don’t launch, manage!”, as he emphasised that on-going engagement and optimisation is the key.

After all this talk about keynote speakers and workshops, it is about time to give a big shout out to the organisers and caterers who did a great job of ensuring everything ran smoothly, patiently answered all our questions and provided delicious food and drinks. The food might deserve a special mentioning, as it was anything I could have hoped for, from bacon rolls in the morning, the well-hyped caramel shortbread, hot dogs to spring rolls and burgers (to just name a few), all were delicious and plenty.

It was an exhausting but very informative and fun day with lots to take away with, and we’re already looking forward to attending next year!